Monitoring of the ocean response to climatic and anthropogenic forcing is critical to understanding the impacts on the global carbon cycle and its ecosystems’ responses. Fundamental changes in the oceans’ biogeochemical cycles, driven largely in response to increased atmospheric CO2 concentrations, are already underway. Increasing evidence of large-scale ocean acidification and resultant deoxygenation has emphasized the need to understand the impacts on biogeochemistry and ecosystem dynamics.

Additionally, increased anthropogenic loading of nutrients into the oceans is also occurring, which may alter the ocean nutrient inventory, potentially driving large changes in ocean productivity.

The Argo network of ocean autonomous floats has been providing critical physical information on the upper ocean temperature and salinity vertical distributions for well over a decade. This global array of over 3,000 floats has dramatically improved our understanding of ocean circulation, temperature and heat content, and salt and freshwater distributions of the world’s oceans. The sustained nature of the program has also provided the opportunity to observe decadal-scale climatic changes. Underlying this program are the technological advances in autonomous profiling floats, which are now capable of providing reliable, stable temperature, conductivity, and pressure measurements for 5 years and beyond. This, in large part, has been enabled by the Sea-Bird Electronics SBE 41 CTD sensor head, which is the de facto standard for temperature and conductivity measurements for the Argo program.

Presently, the biological and biogeochemical properties are chronically undersampled on a global scale, as no such large-scale biogeochemical monitoring program exists similar to the Argo program. While ocean color satellite imagery has provided ocean basin-scale information on surface chlorophyll distributions, routine sampling of the vertical distributions of the biogeochemical properties on ocean basin-scales has yet to be accomplished. Emerging technological advances in both sensor technologies and autonomous profiling platforms are providing a pathway to accomplish this goal.

Over the past decade, several technological advances in sensing biogeochemical properties have been made. New generations of smaller, low-power-consumption sensors designed for long-term ocean sensing have been developed. These include optical dissolved oxygen, chlorophyll fluorescence, optical backscattering, colored dissolved organic matter fluorescence (CDOM), beam attenuation, and nitrate sensors. The Sea-Bird Scientific suite of companies, Sea-Bird Electronics, WET Labs, and Satlantic, have focused on advancing these sensing technologies and have developed a broad suite of sensor products for long-term sensing applications. Biogeochemical sensors such as an optical dissolved oxygen sensor, an extensive selection of bio-optical sensors, and an optically based nitrate sensor have been developed, many of which are specifically designed for use in autonomous platforms, including versions for deep (2,000 m) profiling applications. This broad product suite of biogeochemical sensors for long-term observing has paved the way for incorporation into global observing networks.

While the autonomous profiling floats for the Argo program were initially designed for physical observations, float technologies are evolving to include a broad range of biogeochemical measurements. Several pilot projects have been undertaken over the past 5 years to demonstrate the long-term sensing capabilities of the biogeochemical sensors on autonomous float platforms. The promising results from these limited biogeochemical float deployments have already contributed to an improved understanding of interpretations of ocean color satellite chlorophyll distributions, particulate organic carbon flux, and dissolved oxygen minimum regions of the oceans. These advances in biogeochemical sensors and float platform technologies are enabling broad-scale deployments of biogeochemical floats in the global ocean.

Building on these successful efforts, Sea-Bird Scientific has developed an autonomous profiling float product to meet the biogeochemical sensing needs, the Navis BGC float. The focus of this work was to simplify integration of bio-optical sensors through seamless integration and improve the reliability and scientific interpretation of the data through co-location of the bio-optical and physical measurements. Biogeochemical floats by design must carry and collect data from numerous integrated and external sensors. The Navis BGC float benefits from a recently improved SBE 41 CTD head. This sensor head is composed of conductivity, temperature, and pressure sensors and electronics based on field-tested Sea-Bird Electronics designs. In addition to the standard CTD data collection, the SBE 41 has six additional channels that can capture time-synchronized data with a single scan of the CTD. The channels on the SBE 41 are capable of supporting any mixture of six serial and four analog external sensors and offer up to 1 amp of 5-17V software-programmable power per channel pair. These channels are individually monitored to track current flow and are switchable to enable power savings for low-duty-cycle sensors. Analog inputs are acquired using a differential input 24-bit ADC. The Navis BGC float uses two of the channels for specific Sea-Bird Scientific sensors: the SBE 63 oxygen optode and the WET Labs MCOMS with its fluorescence, backscatter, and CDOM optical sensors. The Satlantic SUNA nitrate sensor, along with other sensors, can be bolted on. As a complement to pressure bin-averaged data returned via telemetry, all data from every scan during every profile from each individual instrument are archived on the Navis BGC float. This comprehensive dataset can be retrieved if the float is recovered and provides additional utility in data analysis and fine-structure investigation. The ability of the Navis BGC float to provide integrated CTD, oxygen, fluorescence, backscatter, and CDOM measurements as well as external sensor data provides a flexible platform that allows scientists and researchers to focus on the underlying data collected, with limited need to spend time correlating data scans stored in different data collection systems with different sampling rates and time stamps. 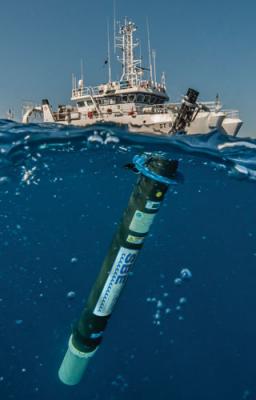 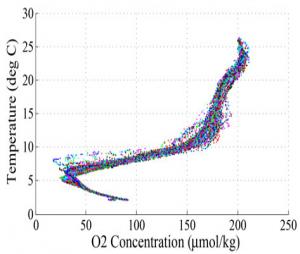 Understanding the impacts of climate change on the global ocean ecosystems will require new and novel ways to sense the biogeochemical properties of the upper ocean on a sustained basis. Autonomous profiling floats equipped with biogeochemical sensors offer a viable, cost-effective, and reliable solution for long-term ocean monitoring of not only temperature and conductivity, but also dissolved oxygen and bio-optical parameters as well as nitrate.