Verifying Serial Number 001 and 002 in an Experimental Kelp Farm

Two moorings mark the borders of an experimental kelp farm. On the northern edge of Hood Canal, a major basin in Washington State’s Puget Sound, a patch of Saccharina latissima (also known as Sugar Kelp) is helping to identify if seaweed aquaculture can help combat ocean acidification. Started in 2015, this project is primarily funded by a $1.5 million grant from the Paul G. Allen Family Foundation. It is a collaborative effort led by the Puget Sound Restoration Fund in partnership with various collaborators, including the University of Washington and NOAA’s Pacific Marine Environmental Lab.

In theory, the premise is straightforward—kelp such as Saccharina latissima harness carbon dioxide that would otherwise acidify the surrounding water, helping to mitigate the unwanted decreases in pH that result in ocean acidification. Whether this CO2 uptake is enough to reduce acidification on a wider scale, and if the impact of the kelp can affect natural variations in the environment, are the questions that draw interest in the experiment.

In January 2018, scientists from University of Washington’s Applied Physics Laboratory and Sea-Bird Scientific installed the very first Deep SeapHOx V2s on the aquaculture plot’s two moorings. These were pre-release “alpha” test versions that had produced promising results in a test bath. In a previous life, these two Deep SeapHOxes were once SeaFET V1s: when Sea-Bird Scientific made the decision to upgrade the line of ISFET pH sensors to the SeaFET V2, these units were readily available for upgrades. Thus, serial numbers 001 and 002 were born.

As moored pH sensors, the Deep SeapHOx V2s were a natural choice for an experiment devoted to studying ocean acidification; the relatively fast sampling speed (fastest rate is 6 seconds/sample) made it possible to track rapid changes in this dynamic environment, and sensor stability reduced the number of visits to the mooring and the required maintenance. For Sea-Bird Scientific, this deployment represented valuable opportunity to field test the new instruments before entering official production.

Similar to the original SeapHOx V1, the V2 units are a combination of a Deep SeaFET V2 pH sensor and an SBE 37-SMP-ODO moored CTD+DO sensor. The change from V1 to V2 included new internal hardware with new firmware that improves upon stability and changes the instrument’s operating characteristics. The sensing elements remained the same however; like the SeaFET/SeapHOx/Deep SeapHOx V1, the shallow SeaFET/SeapHOx V2 utilizes the Honeywell DuraFET ISFET-based pH sensor with an internal KCl gel reference, as well as an external chloride reference. The Deep SeapHOx V2 utilizes the same a ISFET sensor and external reference rated for 2000m deployments as the Deep SeapHOx V1. Unlike wet-chemistry or glass electrode pH sensors, the SeaFET/SeapHOx uses solid-state pH sensing technology that does not rely on reagent cartridges, and has significantly higher stability in seawater. Compared to the original SeaFET, the V2 units have outperformed their predecessor in data quality, performance, and reliability.

The aquaculture site is located on the northern side of Hood Canal just east of Hood Head Island, a popular area for recreational shellfish harvesting. Two moorings were installed on the north and south ends of the plot. Standard colored buoys mark the boundaries of the underwater installation, with rows of seeded lines hosting sugar kelp below the surface.

The two moorings are known as ORCA buoys, short for “Oceanic Remote Chemical Analyzer”. Each mooring is an autonomous system that hosts a collection of moored and profiling sensors as well as a weather station. Onboard solar panels and batteries power the buoy’s systems and integrated sensors, while wireless telemetry allows for transmission of real-time data. The particular ORCA buoys installed in the aquaculture plot hosted CTDs, current meters, chlorophyll/turbidity sensors, oxygen sensors, and pH sensors.

Along with the pH data from the SeapHOx V2s, each mooring also hosted a pCO2 system and an in situ colorimetric pH sensor. The colorimetric pH sensor utilizes traditional wet-chemistry to measure pH with an expected accuracy of ±0.003 pH, packaged in a deployable sensor housing. Because the two SeapHOx V2s were alpha test units, the additional data from these instruments (and pH bottle data from a spectrophotometer) was useful for determining sensor performance.

While researchers are still analyzing the data for the larger aquaculture project, the SeapHOx V2s were recovered in July 2018 after providing data throughout the planned seven-month deployment. Preliminary data results show that the sensors performed well, staying within the expected data quality specifications. The success and lessons learned from this deployment persist in every SeaFET V2/SeapHOx V2 sensor made today.

The moored pH data overall showed rapid increases in pH in early March and May, consistent with spring phytoplankton blooms, as well as current-driven variability in DO, Chlorophyll, pH, and pCO2. Overall, the SeapHOx V2’s rapid sampling and stability provided valuable pH data for the moored application in a coastal environment. 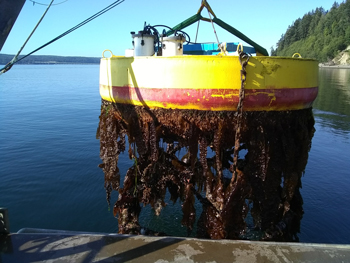 Along with testing the alpha SeapHox V2s and creating a pH time-series, one of the objectives of the moorings was to detect time-changes in pH as a parcel of water moves across the Saccharina latissima patch (ΔpH). Analyzing current direction and speed data alongside pH data from each mooring can provide a model for how the kelp in the patch affects the pH given the time a parcel of water takes to cross the path, and the resulting change in pH when it encounters the other sensor; these data are still being processed by research associates.

While reliable for most of the deployment, the SeapHOx V2s did experience some issues in the field throughout the deployment. Early firmware issues affected data processing and communication with the CTD in one of the SeapHOx units, and biofouling may have affected the data quality towards the end of the deployment. These problems helped inform upgrades later implemented in the current version of the SeaFET V2, and the rollout of the faster data uploads and processing within the UCI 2.0 software now compatible with the SeaFET V2.

Thank you for filling out the form!