Free-flushed CTD (conductivity-temperature-depth profiler) installations currently deployed on gliders are being replaced in favor of a modular, low-powered, and flow-controlled CTD configuration. There are several practical and scientific advantages motivating this change.

The practical advantages are improvements in ease of use, including installation, data acquisition, and data handling. The self-contained CTD module allows glider manufacturers and operators to exchange CTDs without opening the pressure hull of the glider. Internal memory in the CTD module allows self-recording of a constant sample-rate time series, a feature not always possible on the free-flushed Glider CTD installations that rely on the glider data acquisition system for logging data. Flexible sampling choices provide a variety of options to conserve power while achieving competent data, from constant sampling at a fixed rate of up to 1Hz while pumping continuously down to “spot sampling” with intermittent pumping. Data handling is simplified because data can be uploaded directly from the CTD in engineering units at the end of a dive or mission, and, if required, consistent, routine data processing protocols can be easily implemented over an entire data set.

Data quality improvements also are motivating the switch from free-flushed CTDs to flow-controlled modular CTDs. Accurate computation of core physical parameters, such as salinity and density, requires knowledge of the temperature (T) and conductivity (C) sensor response times and the ability to temporally align their responses. The drawback with free-flushing CTDs comes to bear because conductivity sensors have a response-time dependence on the water volume flow rate through the sensor and also experience a temporal lag in response while traversing temperature gradients due to heat stored in the sensor materials. The latter causes a cell thermal mass error in conductivity values and subsequent derived parameters (e.g., salinity). Having a steady flow through the conductivity cell is desirable because T-C responses are known and can be matched, and the amplitude and lag period of the cell thermal mass error can be quantified and corrected for in the data. A constant sample rate time series is also critical to implementing effective T-C alignment and cell thermal mass corrections.

The flow-controlled modular CTD, therefore, improves data quality and also simplifies data processing and analysis. More accurate data are achieved directly by matching T-C sensor response and reducing cell thermal mass errors. Removing heat trapping materials from around the C sensor on the modular CTD improves external flushing, further reducing cell thermal mass errors in raw conductivity data. In-line, ducted, and pumped T-C sensors guarantee the same water parcel is sampled by the T-C sensors (and dissolved oxygen if installed), a requirement for temporal T-C measurement alignment and accurate salinity computation. Using the flow-controlled CTD results in quantifiable and consistent T-C responses and allows simple and consistent T-C measurement alignment and conductivity cell thermal mass corrections to be made if desired. In contrast, free-flushed, un-ducted T-C configurations cannot assure that the water measured by the thermistor will be the same water that enters the conductivity sensor. Furthermore, they rely solely on glider movement to provide water flow past the T-C sensors. Glider speeds can vary widely on a given dive, causing free-flushed CTDs to experience variable flow rates, resulting in variable T-C responses that are much more difficult to correct for in the data.

To demonstrate the performance of two different sampling schemes available on the modular Glider CTD, salinity profiles made with two prototype flow-controlled Glider CTDs are compared to a side-by-side profile made with a standard 24Hz CTD (SBE 9plus). One prototype Glider CTD was configured to continuously pump water past the in-line, ducted T-C sensors at a constant rate of 10ml/s, while sampling at 0.5Hz (every 2 seconds). The other was programmed to run the pump for 2 seconds, make a measurement, then turn off the pump until the next sample at a rate of 0.125Hz (every 8 seconds). All three CTDs were deployed together on a frame and lowered through the water column at about 50cm/s. The T-C data from the 24 Hz CTD were temporally aligned and thermal mass corrected to produce an accurate salinity profile for comparison with the prototype Glider CTD salinity profiles. 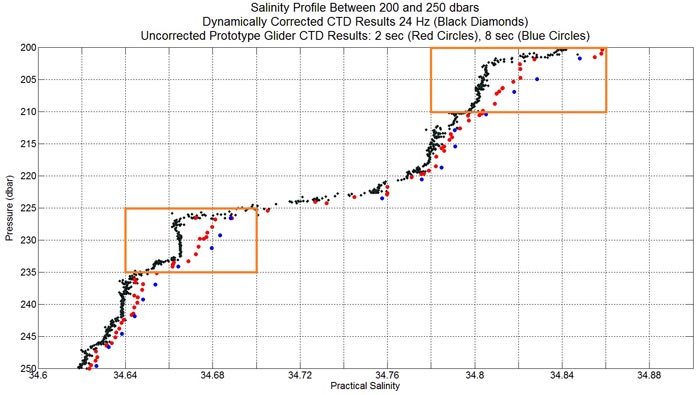 
Figure 2 shows dynamic corrections made to the prototype  Glider data for T-C alignment and cell thermal mass significantly reduce the computed salinity errors observed in Figure 1. These corrections are possible because of the fixed flow rate past the sensors and the fixed sample rate of both CTDs. Once aligned and cell thermal mass corrected, the salinity profile from the continuously pumped 2-second prototype Glider CTD agrees closely with the profile from the 24Hz CTD. Despite having the same dynamic corrections applied to both Glider T-C outputs, the improvements on the 8-second prototype Glider salinity data are clearly less successful. The sample rate and discontinuous pumping are a factor in this example. The 8-second sample rate was too coarse to resolve small temporal misalignments between T-C response times and may have been too close to the time scale of the conductivity cell thermal mass lag (~10 seconds at a constant flow of 10ml/s) to make the cell thermal mass corrections effective. Discontinuous pumping while moving through a thermally stratified region may have also induced variations in the cell thermal mass amplitude and time lags, resulting in less reliable corrections. 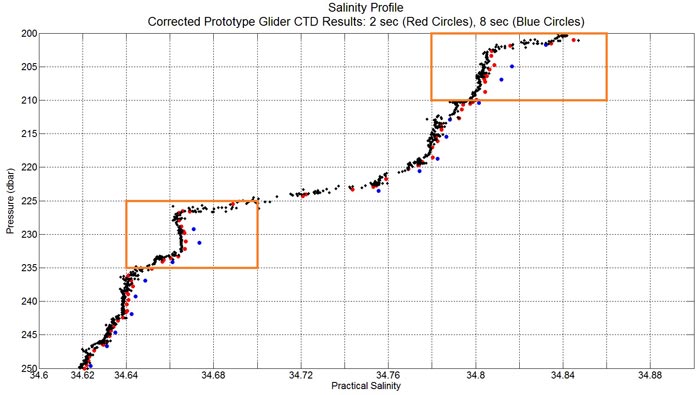 Figure 2 Same salinity profiles as shown in Figure 1, but here, the prototype Glider CTD data have been corrected for T-C temporal alignment and cell thermal mass. Note how the slower sampled (8 second) Glider CTD salinity (Blue Circles) still shows large discrepancies from the 24Hz CTD values, despite having the same corrections as those made on the 2 second Glider CTD (Red Circles). This is largely due to undersampling in time and in part due to discontinuous pumping

New features available on the modular Glider CTD will produce more accurate CTD data while offering more flexibility in sampling protocols, making instrument and data handling much easier and more efficient for the glider operator. The choices - continuous versus discontinuous pumping, as well as fast versus slow sample rate - should be based on the deployment environment, desired salinity accuracy, spatial resolution requirements, and power considerations for a given glider mission.

Carol Janzen, Ph.D. (Carol Janzen, Ph.D.) is a Physical Oceanographer at Sea-Bird Electronics. She has worked as a coastal observational oceanographer for over 25 years in private consulting, state government, and academia, and has extensive experience collecting and analyzing observational data from multiple ocean-going platforms and instrumentation packages. At Sea-Bird, she assists in R&D efforts characterizing sensor response and calibration as well as evaluating instrumentation and sensor performance in the field. She also serves as a science-liaison for the company and travels internationally to teach courses on oceanographic CTD principals of operation, sources of error and methods for correction. Current interests include freshwater applications of sensor technologies, and evaluating data accuracy requirements for monitoring climate change and ocean and coastal circulation models.