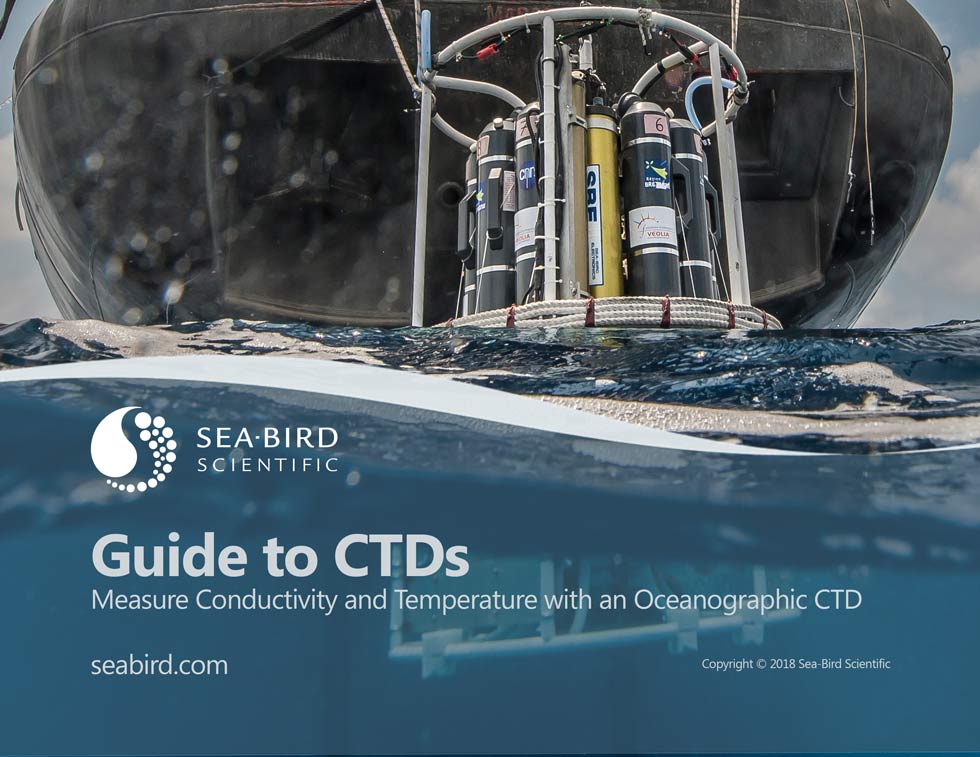 What is a CTD? 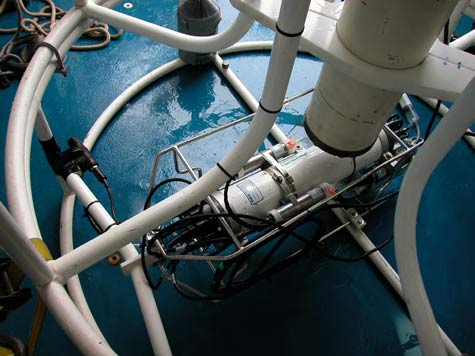 D (Depth): Despite having depth in the name, all CTDs actually measure pressure, which is not quite the same thing. The relationship between pressure and depth is a complex one involving water density and compressibility as well as the strength of the local gravity field (a function of the latitude). In oceanography, pressure in a body of water is measured in decibars; the pressure at the surface of the water is 0 decibars. As an approximation, each 1 meter depth of water (3.28 feet) is equivalent to 1 decibar (for example, the pressure is 10 decibars at 10 meters depth).

T (Temperature): Temperature is measured in ITS-90 degrees Celsius (°C). ITS-90 is an instrument calibration standard agreed to by a number of scientists in 1990, which provides for comparison and compatibility of temperature measurements internationally (so 25 °C in the U.S. is the same as 25 °C in China, etc.). For the ocean, temperatures typically range from -2 to 35 °C (28.4 to 95.0 °F).


If we measure conductivity, temperature, and pressure, we can calculate the amount of dissolved salts in the water – the salinity. The units for salinity are PSU (Practical Salinity Unit); a typical value in the ocean is 35 PSU. Once we know salinity, we can calculate many other parameters, such as density and sound velocity.

The term CTD is often used to describe a package that includes the actual CTD as well as auxiliary sensors to measure other parameters (such as dissolved oxygen, pH, turbidity, fluorescence, oil, PAR, nitrates, altimeter, etc.).


What can we do with data from a CTD?

CTD System for profiling from a ship: SBE 9 CTD has modular temperature and Conductivity sensors that can be easily exchanged in the field if they are damaged. 9 can also accommodate redundant Temperature and Conductivity sensors for high-level scientific work, where you want to back-up to primary sensors. 9 can also provide power to and integrate data from up to 8 auxiliary sensors.

Smaller, less expensive system for profiling from a ship: SBE 19 V2 SeaCAT CTD has integrated Temperature and Conductivity sensors, and can provide power to and integrate data from up to 7 auxiliary sensors.

CTD Options for Off Ship-Based Profiling

Profiling CTDs can also be deployed in many ways other than being lowered and raised from a ship. They can be integrated with an autonomous vehicle like an ROV (Remotely Operated Vehicle), a glider, or an Argo float that drifts with the currents. The type of vehicle and characteristics of its use dictate the CTD design that will provide the best data; CTDs are not one-size-fits-all instruments, if you are interested in good data.

Because some of these CTDs are deployed for an extended period of time (3 to 5 years for an Argo float!), they are subject to – the growth of marine organisms on and inside the sensors. Fouling is more common in warm surface waters. Sea-Bird uses EPA-approved anti-foulant devices to keep the inside of the sensors clean, so that fouling will not affect the measurements.

A moored CTD measures water parameters in one location, over an extended period of time, providing a time series of data that can reveal information about seasonal variations in the water, incursion of pollutants into the area (such as an oil spill), etc.

Because moored CTDs are in place for an extended period of time, they are subject to bio-fouling – the growth of marine organisms on and inside the sensors. Bio-fouling is more aggressive in warm surface waters. Sea-Bird moored CTDs use EPAapproved anti-foulant devices to keep the inside of the sensors clean, so that fouling will not affect the measurements.

Effective anti-fouling techniques for auxiliary optical sensors include the use of copper, plus a wiper to clear the optics prior to each sample.

Photo: An SBE 16plus SeaCAT CTD after recovery. While the outside of the CTD is encrusted, the intake to the Conductivity sensor is clear, indicating that the inside of the cell is clear as well.

The face of each WET Labs ECO sensor is also clear, because the copper faceplate and bio-wipers are preventing build-up of fouling.