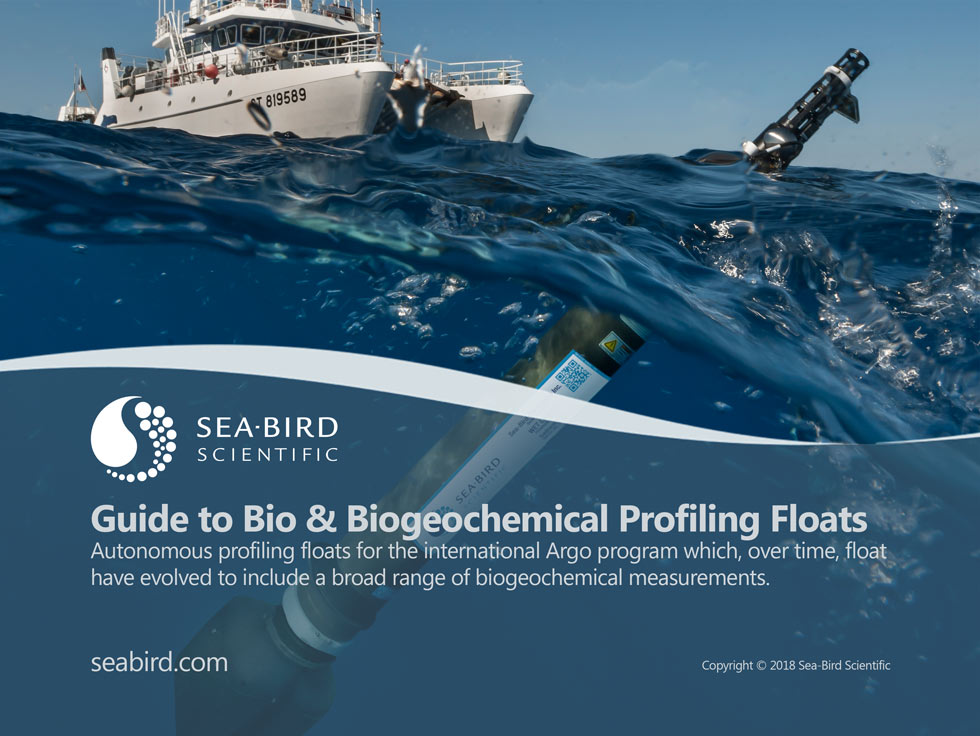 Argo is an international system for observing temperature, salinity, and currents in the Earth's oceans that has been operational since the early 2000s. The real-time data it provides is used in climate and oceanographic research. A special research interest is to quantify the ocean heat content (OHC). 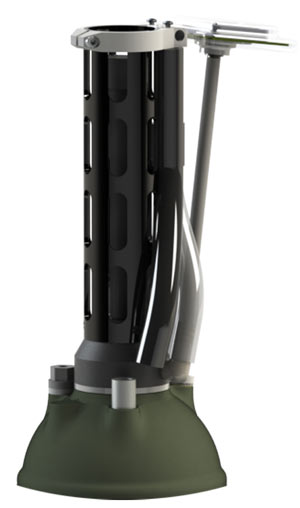 Monitoring the ocean responses to climate change is critical to understanding the impacts of the global carbon cycle and ecosystem responses. The Argo network of ocean autonomous floats has been providing critical physical information on the upper ocean temperature and salinity vertical distributions for well over a decade. This global deployment of floats has dramatically improved our understanding of ocean circulation, temperature and heat content, and salt and freshwater distributions of the world’s oceans, giving science the ability to monitor climate change over decades rather than years. Advances in autonomous profiling float technology now provide reliable, stable temperature, conductivity, and pressure measurements for 5 years and beyond. This, in large part, has been enabled by the Sea-Bird Scientific SBE 41 CTD sensor head, shown here, which is the standard for temperature and conductivity measurements for the Argo program.

The study of the relationship between the geochemistry of a region and the animal and plant life in that region.

While the initial program started in the late 1990s, it was not until 2000 that deployment of the floats started. Argo now consists of a fleet of almost 4000 currently operating drifting profiling floats deployed worldwide, with the total deployment to-date nearing 13,000. Because the typical lifetime of an Argo float is 4-5 years, maintaining this array requires replacement of about 800 floats per year. The array provides around 100,000 observations per year, and floats operate throughout all the ice-free deep-ocean areas of the world.

The Argo program is named after the mythical Greek ship , to emphasize the complementary relationship of Argo with the Jason satellite altim.

The Argo float network has played a key role in our understanding of ocean dynamics and warming. The network’s creation was a a major step forward in the ability to broadly monitor the ocean's temperature and salinity on a global scale, at higher frequency and lower cost than previously possible with ship-based monitoring. The program achieved its first goal of 3000 operating floats in October 2007, and on 30th October 2012 another milestone of one million data profiles was achieved (twice the amount collected by research vessels during the previous 100 years).

Each Argo float weighs 20–30 kg. Profiling floats are commonly used in oceanography and become "Argo floats" only when they are deployed in conformity with the Argo data policy. In most cases floats drift at a depth of 1000 m (the so-called parking depth) and, every 10 days, by changing their buoyancy, dive to a depth of 2000 m and then move to the sea-surface, measuring conductivity and temperature profiles as well as pressure. Page 5 has a diagram showing this process.

From temperature and conductivity, salinity and density can be calculated. Seawater density is important in determining large-scale motions in the ocean. Average current velocities at 1000 m are directly measured by the distance and direction a float drifts while parked at that depth, which is determined by GPS or Argos system positions at the surface. The data is transmitted to shore via satellite, and are freely available to everyone, without restrictions.

Go online for data driven interactive maps:
SOCCOM allows you to check the status of our biogeochemical floats, and track them on this interactive map with float tracks and simple data profiles (note this is not part of the core Argo program):
http://soccom.princeton.edu/content/bgc-float-data-available-online 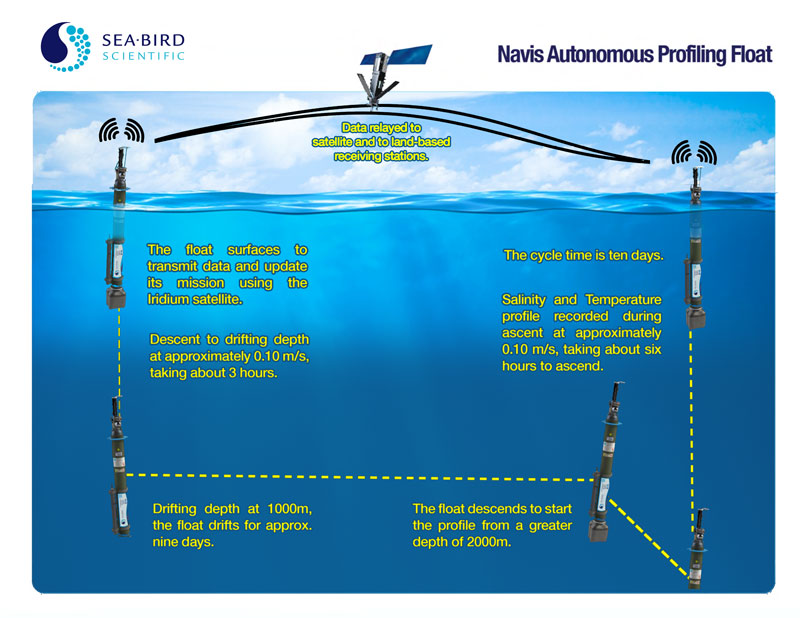 While the autonomous profiling floats for the Argo program were initially designed for physical observations, float technologies have evolved to include a broad range of biogeochemical measurements.


For the better part of 10 years, Argo-style floats were used primarily for collection of ocean temperature, salinity, and current data. This however is only collecting the physical properties of the ocean, not the ocean’s interior biology and chemistry, which can shed light on the base of the ocean’s food web and the amount of carbon that is absorbed by the oceans.

New technological advances in both sensor technologies and autonomous profiling platforms provided a pathway to accomplish this goal.

Right: An early version of the Sea-Bird Scientific Navis BGCi attached to a water sampling carousel, undergoing sea trials in 2012 in the western Mediterranean. 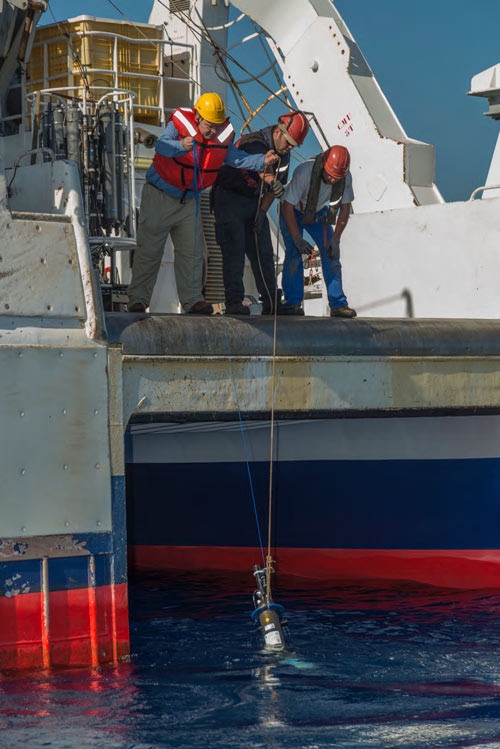 To travel this path, Sea-Bird Scientific focused on advancing sensing technologies and has developed a broad suite of sensor systems for long-term sensing applications. Biogeochemical sensors for measuring dissolved oxygen, pH, irradiance, radiance, chlorophyll, CDOM, backscattering and nitrate have been specifically designed for use in autonomous platforms, including versions for deep (2,000 m) profiling applications.

This broad product suite of biogeochemical sensors for long-term observing paved the way for incorporation into global observing networks. Building on these successful efforts, Sea-Bird Scientific developed the Navis Autonomous Profiling Float with Biogeochemical Sensors (commonly referred to as the Navis BGC).

The Navis BGCi family of floats has helped propel biological and biogeochemical ocean research since 2013.

Left: An early version of the Sea-Bird Scientific Navis BGCi profiling float undergoing sea trials in 2012 in the western Mediterranean.

The Sea-Bird Scientific Navis Autonomous Profiling Float is used in the Argo and other ocean monitoring programs such as SOCCOM (see following section), with sufficient power for over 300 profiles with the SBE 41 CTD.

The float has a traditional layout, with the sensor head at the top and the buoyancy bladders at the bottom. The Navis buoyancy engine uses a positive displacement piston pump to transfer silicon oil from internal to external reservoirs to increase the float volume and cause it to rise. This system provides improved energy efficiency, better parking stability, and increased depth range over existing floats.

At the surface, Navis uses a Garmin GPS to acquire positional information. It then transmits the acquired data via an Iridium Transceiver. The Iridium antenna is mounted on the CTD end cap, and is supported by the CTD cell guard.

The Navis aluminum hull has a smaller diameter and length than other existing floats, providing a lightweight and cost-effective package that requires less energy to operate. The float is powered by twelve lithium DD batteries in a Sea-Bird battery pack. The battery pack provides sufficient power for over 300 CTD profile cycles to 2000 dbars.

The Navis BGCi autonomous profiling float with integrated sensors for measuring dissolved oxygen (SBE 63) and fluorescence/backscattering (ECO-MCOMS) is a BGC float available from Sea-Bird Scientific, and is used in a multiplicity of float-based biological and biogeochemical programs. The sensors take continuous measurements (1 Hz) through ascent, and provide high accuracy, resolution, and stability.

The ECO-MCOMS uses our demonstrated technology to supply three optical sensors in one, providing chlorophyll a, backscattering, and CDOM, or chlorophyll a and 2 backscattering channels. MCOMS is integrated directly into the float end cap and co-located with DO and physical measurements.

As an option, multiple sensors can be attached to the float hull and cabled to the end cap. Data from all sensors, including the optional bolt-on sensors, is integrated in the data stream by the SBE 41N CTD electronics. Available bolton sensors include the Deep SUNA (nitrate), OCR 504 (4-channel radiometer), and C-Rover 2000 (transmissometer).

Optional bolt-on sensors are highlighted on the next page, with a close up of the BGCi head sensors.

Measuring the Ocean's pH and Nitrate

The Deep SUNA utilizes the proven MBARI-ISUS nitrate measurement technology and is in extensive use worldwide. The nitrate algorithm incorporates a temperature-dependent correction of the observed bromide absorption spectrum. Both the Float Deep SeaFET and Deep SUNA incorporate physical property data from the SBE 41N CTD to provide corrected data to the end user.

SOCCOM stands for Southern Ocean Carbon and Climate Observations and Modeling, whose stated mission is to drive a transformative shift in the scientific and public understanding of the role of the vast Southern Ocean in climate change and biogeochemistry.

The international Argo program has deployed thousands of autonomous floats to measure temperature and salinity in the world’s oceans. The SOCCOM project is augmenting conventional Argo floats with biogeochemical sensors to measure carbon (pH), nutrients (nitrate), and oxygen.

SOCCOM is the world’s first large-scale biogeochemical Argo deployment. The project will increase the number of biogeochemical measurements made monthly in the Southern Ocean by 10-30 times (more in the Southern Hemisphere winter, when observations are scarcest), and the data will be made freely available to the public. SOCCOM is also unique in combining an innovative observational program with a strong modeling program, and is integrating professional outreach partners into the program. 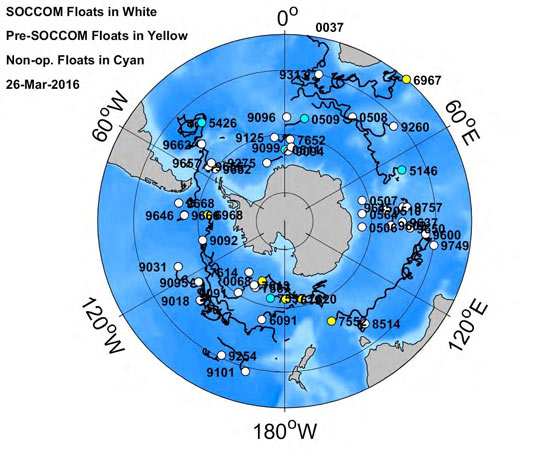