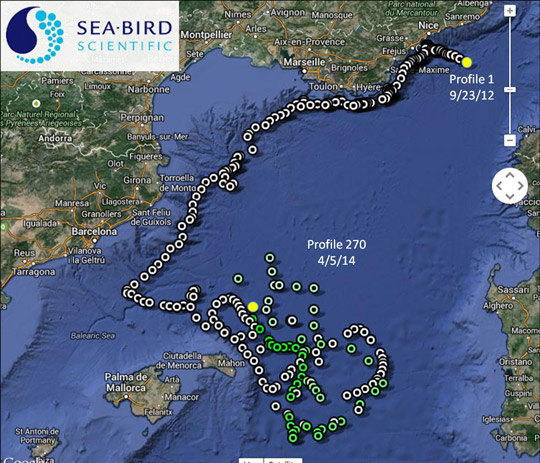 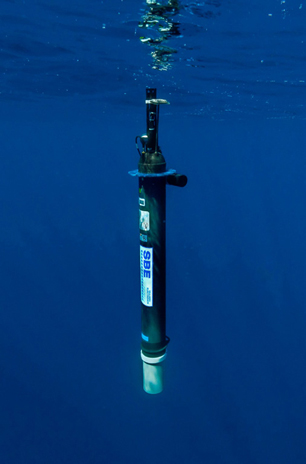 If billions of phytoplankton fall in the ocean and no one observes it, does it still result in a net sequestration of carbon? In the case of a dramatic deepwater formation event off the Gulf of Lyon in the winter of 2013, the ‘fall’ was seen by an autonomous float equipped with the biogeochemical sensors needed to record the event.

Profiling floats have proven to be a stalwart technology economically generating robust basin scale data sets of temperature and salinity (http://www.argo.net) that have significantly increased our fundamental understanding of the ocean (http://www-argo.ucsd.edu/Bibliography.html). The Navis BGC floats take advantage of advances in float technology and sensor miniaturization (Barnard and Mitchell, 2013) to expand the capability of the float technology to carry a broad suite of biogeochemcal sensors. With sensors for dissolved oxygen, phytoplankton pigments (chlorophyll), particle mass concentration and particulate organic carbon (backscattering and beam attenuation), dissolved organic matter (fDOM), nitrate and pH, the Navis float platform can be used to autonomously monitor the major parameters of biogeochemical processes.

In September of 2012, Sea-Bird Scientific’s Navis BGC s/n 0028 profiling float equipped with a SBE 41 CTD, SBE 63 ODO, and WET Labs ECO Triplet with chlorophyll and CDOM fluorometers as well as a 700 nm backscattering sensor was released at the BOUSSOLE site southeast of Nice, France. The float proceeded to collect 270 profiles through April of 2014. The float incorporated Iridium two-way satellite communications for fast data transfer and mission adaptation. The float deployment was generously supported through the efforts of Dr. David Antoine with assistance from Emilie Diamond during the cruise. Data management on shore was managed through the assistance of Dr. Hervé Claustre and Antoine Poteau. Additional feedback from Dr. Fabrizio D’Ortenzio and Dr. Lois Prieur regarding profile questions specific to the Mediterranean basin was greatly appreciated. All individuals are associated with the Marine Optics and Remote Sensing Lab at Laboratoire d’Océanographie de Villefranche (LOV). The BOUSSOLE program is described in detail at the website: obs-vlfr.fr/Boussole/html/home/home.php.

Between February 10th and the 23rd (profiles 93 and 97 respectively), the typical oceanic structure of a mixed layer and pycnocline above the low chlorophyll mesopelagic zone completely collapsed. The deep water mixing event produced a signature water column structure (or lack thereof) with temperature increasing with depth due to adiabatic heating and salinity relatively uniform throughout the upper 800 m (Figure 2).

The post-overturn chlorophyll concentration profile decreased by a factor of seven in the upper hundred meters compared to the pre-overturn profile while increasing at all depths below the previous location of the pycnocline. Previous work with moored instruments on the slope off the Gulf of Lyon has established that open ocean overturn events off the Gulf of Lyon are pathways for significant fluxes of particulate organic carbon (Stabhalz et al., 2013) that result in increase biological activity in the midwater column (Tamburini et al., 2013). The biogeochemical float profiles collected in this study demonstrate that this flux can occur rapidly, with net vertical displacements of hundreds of meters per day. This mode of rapid vertical transport is significantly faster than average settling velocities derived from particle traps studies (Walsh et al., 1988). This suggests that the biological material reaching depths during an overturn will be less degraded than the ‘normal’ oceanic particle flux which is dominated by aggregates (Walsh, 1992). Reinforcing this is the fact that the biogeochemical float recorded increases at depth in chlorophyll fluorescence, which is generally associated only with viable or recently senescent cells.

Along Slope Sections of Physical and Biogeochemical Parameters

The extent of the overturn in space and time along the Gulf of Lyon is on the order of a month over at least 100 km (Figure 3), with the reemergence of near surface net primary production as indicated by an increase in the dissolved oxygen concentration after about 20 days (Figure 4). Note that the biological response precedes significant stratification in the physical parameters. 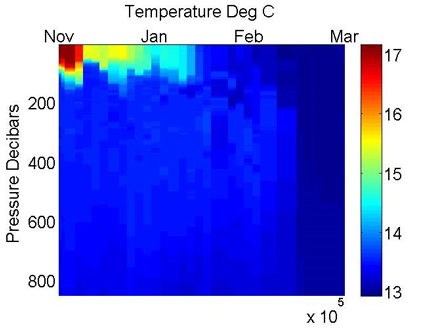 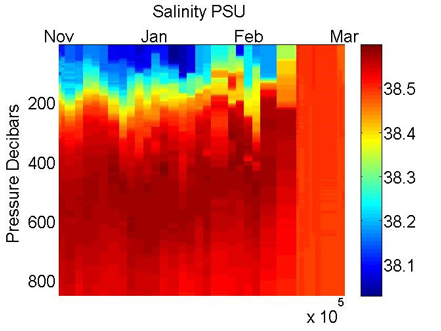 A Navis BGCi profiling float deployed in the north western Mediterranean in 2012 collected data on the basin slope as it travelled west and captured a rapidly developing overturn event. The biogeochemical sensors on the profiling float allowed for the calculation of net transport of particulate material associated with the overturn. This suggests that profiling floats can be used to generate data sets to monitor slope to basin biogeochemical fluxes and processes at densities that can reliably capture the most significant events

Walsh, I. 1992. Large Aggregate Flux and Fate at the Seafloor: Diagenesis During the Rebound Process. In: Deep-Sea Food Chains and the Global Carbon Cycle, G.T. Rowe and V. Pariente, eds. pp. 365–373, Kluwer Academic 1992.