The promise of ‘chemical free’ chemistry is the oxymoron that you think it is. But the development of a ‘wet chemistry free’ sensor for determining nitrate concentrations in sea-water by Ken Johnson and Luke Coletti [1] gave the oceanographic community a tool that has turned into a robust and cost-effective way to measure one of the primary nutrients. Now licensed and marketed by Sea-Bird Scientific, the UV absorption deconvolution method is the technology behind the SUNA Optical Nitrate Sensor, allowing researchers and managers to get reliable nitrate concentration measurements without the limitations of traditional wet chemistry.

The advantage of measuring a dissolved species using absorption over wet chemistry is manifest in two major ways: no need to handle a sample, and no need to prepare, store, and deliver reagents. Just as photographic film has given way to digital imaging, ease of use tends to overcome differences in fidelity or accuracy between older and newer technology. In the case of digital photography, the explosion of the ‘selfie’ was enabled by the ease of taking, transmitting and disseminating the image. With the SUNA, the effort required to learn and assemble the needed sample processing has crumbled away with the ability to measure nitrate at the same time and resolution as other parameters.

However, while the SUNA instrument itself is an elegant tool, there is a host of factors that must be considered to measure nitrate concentrations with the accuracy and precision approaching that of the wet chemistry technique. There are always trade-offs, and though the SUNA returns more rapid data delivery over longer time periods than wet chemistry, the user needs to understand the framework of the measurement to understand how to interpret the data, and most importantly the limitations of the technique.

In this article we describe SUNA technology, optical nitrate theory, SUNA calibration by Sea-Bird Scientific, and examples of data collection and validation techniques. Our intent is to highlight that while the measurement is robust, the optical technique requires a dutiful effort by the user to eliminate interference for delivering the best data.

The SUNA uses the optical absorbance characteristics of nitrate to calculate concentration by measuring the response of nitrate to excitation by UV light across a range of wavelengths. A deuterium lamp illuminates the sample volume with UV light. The water in the illuminated sample volume absorbs a variable fraction of the photons it. Then the intensity of light passing through the volume is measured with a spectrometer. The ratio of the light entering the volume and detected by the spectrophotometer yields the wavelength specific absorbance. These absorbance spectra across a range of wavelength channels are used to calculate the dissolved nitrate concentration, which is reported in micromoles per liter (μM) or milligrams of nitrogen per liter.

The former explanation vastly simplifies the conversion from optical absorbance to nitrate concentration. Optical absorbance is additive (the Beer-Lambert Law), and the presence of other absorbing species in seawater interferes with the nitrate measurement. In other words, the absorbance measured by the SUNA is the sum of the absorbance of nitrate, seawater and any additional material found in the sample volume. In SUNA calibration and processing, the effects of interfering species on measured absorbance spectra are considered to accurately determine nitrate concentrations.

To remove baseline water absorbance spectra, SUNAs are calibrated with nitrate-spiked water, as well as nitrate-free water. The default class-based calibration uses coefficients generated from a library of historical calibrations. For greater accuracy, SUNA sensors are individually calibrated at Sea-Bird Scientific for use in fresh or seawater. Due to difference in absorptivity characteristics of seawater and freshwater, the calibration data for each of these applications is distinct.

Calibrations for instruments to be used in freshwater are determined from aqueous nitrate standards of deionized water with 40 and 4000 μmolar nitrate concentrations and pure deionized water. The second calibration at 4000 μmolar is performed for accuracy in terrestrial applications where nitrate concentrations are large. It is important to note that SUNA units configured for use in freshwater do not give reliable nitrate readings in seawater, as the interference from bromide will not be accounted for without seawater absorption data. 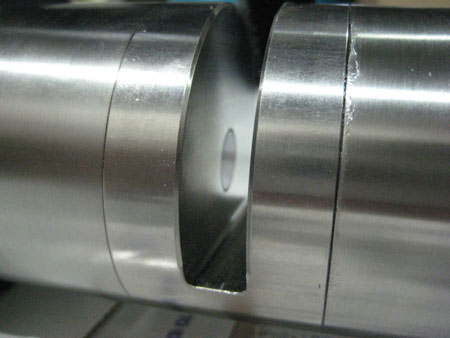 Figure 1: The 10mm path length, corresponding to the 10 mm gap between the SUNA V2’s lamp and spectrometer windows.

wavelength channels that are resolved. Operation in optically dense or turbid water can reduce optical transmission, reducing the strength of the signal. To compensate the SUNA has adaptive sampling capabilities, varying the length of time over which each measurement is made. Integration times vary from 200-500 ms, increasing in turbid and optically poor conditions. On the other hand, absorbance greater than 1.3 in a wavelength channel can significantly bias the regression and is therefore not used in processing. If less than 10 wavelength channels are available, the multivariate regression cannot be performed and nitrate concentration is not calculated. Biofilms and window scratching can also alter light transmission to the sensor. The source of this error can be prevented by keeping the optics clean and using the optional Hydro-Wiper external antifouling. 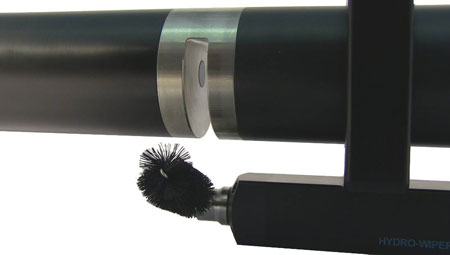 Light source aging causes sensor drift as the intensity of the light emitted from the light source decreases with time. This can be corrected by the user by regularly updating the spectrum of reference deionized water. Instructions for updating the reference spectrum and the calibration file are provided in the SUNA manual.

Interference with overlapping absorption spectra from other materials in the light path affects sensor accuracy. Bromide, nitrite, bisulfide, CDOM and suspended particulates have absorbance spectra similar to nitrate and if not removed, nitrate concentrations are biased. This was found in early field testing of the SUNA nitrate sensor and its technological predecessors, where the temperature dependence of bromide absorbance in seawater caused a bias. This bias is corrected by changing the baseline seawater absorbance spectrum using in situ seawater temperature and salinity [3]. The baseline seawater absorbance spectra are corrected, then subtracted from the measured absorbance before using multivariate linear regression to determine nitrate concentration. Gathering robust CTD measurements concurrently with SUNA nitrate measurements allows the application of the seawater correction in postprocessing using Sea-Bird UCI software, or in situ when properly interfaced as on ARGO floats.

Colored Dissolved Organic Matter (CDOM) and particulate suspended matter (turbidity) affect accuracy because they absorb at all wavelengths and therefore have absorbance spectra that overlap nitrate. CDOM and turbidity spectra cannot be parameterized with independent measurement, such as the seawater correction, as there is no universal model for their concentration and composition. To correct for CDOM and turbidity, the absorbance spectra can be characterized at the deployment site, then subtracted from the measured absorbance spectra in post-processing as described in Johnson and Coletti et al. [1]. Typically, this correction only needs to be applied in regions with high sediment loads or phytoplankton blooms.

The King County Dept. of Natural Resources and Parks (in Seattle, WA USA) conducts long-term marine monitoring to assess baseline conditions and trends in Central Puget Sound. Routine nutrient data, including nitrate, have been collected since 1994. Twice monthly observations are collected at several marine stations in Puget Sound (Figure 3), using a suite of biogeochemical sensors while concurrently collecting discrete water samples at multiple depths. This example enables the direct comparison of nitrate concentrations made with the SUNA nitrate to those made with traditional wet chemistry methods.

The SUNA V2 is configured with a 10mm path length and is controlled by a Sea-Bird 25plus CTD (Conductivity, Temperature and Depth). The CTD collects measurements in real-time during the downcast and upcast and triggers the acquisition of discrete water samples by closing the sampling bottles at specific depths during the upcast. These bottle samples are then used to measure the nitrate concentration in the water using a colorimetric analysis method (NEMI METHOD, SM4500-NO3-F). The SUNA V2 nitrate sensor was calibrated with nitrate spiked seawater at Sea-Bird Scientific’s state of the art sensor development labs. Absorbance spectra were corrected for seawater bromide using in situ temperature and salinity data following Sakamoto et al. [3]. 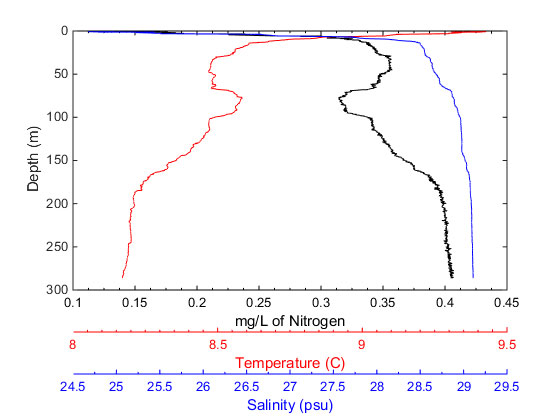 Figure 4 shows the vertical profile of the water column at the Jefferson Head station and the relationship between temperature (red line), salinity (blue line) and nitrate concentration (black line) versus depth. In the upper water column (<30 m), the nitrate concentration is very low because it is rapidly consumed by phytoplankton which are fueled by the penetration of the sun rays into the seawater. Below this, the nitrate concentration is larger because upwelling replenishes nutrient concentrations from deeper, nitrate-rich water. Figure 5 shows the SUNA V2 nitrate data from the upcast (blue circle) and downcast (red circle) along with the in situ discrete nitrate bottle samples (green star). Differences between the upcast and the downcast can be attributed to vertical movement of water. The reproducibility of the sensor is demonstrated by the negligible hysteresis between the upcast and downcast. The SUNA V2 nitrate sensor accuracy was also excellent, to within ±0.18 μM of nitrate when compared to discrete bottle samples taken from 20-300m depth (the accuracy specification of a 10mm cell SUNA V2 with T and S correction is ±2 μM). Nitrite is included in the bottle samples and can contribute from 0-2.2 μM of the total nitrate+nitrite. The 1m bottle sample had poor agreement with the reported value from the SUNA V2 nitrate sensor (Δ3.5 μM from bottle sample). This could either be due to high variability in the surface layer, as the SUNA and the bottle samples are not collocated.

With the appropriate calibrations and corrections, the SUNA nitrate sensor is a robust tool to measure nitrate concentrations in oceanic and freshwater environments. In this case study, SUNA measurements from Puget Sound corrected for bromide match the accuracy of measurements made with traditional wet chemistry techniques to within ±0.18 μM. While care must be taken when processing SUNA data, updates to the reference spectrum and seawater corrections can be applied by the user with Sea-Bird Scientific’s UCI graphical data processing software if concurrent temperature and salinity measurements are available. These corrections help SUNA measurements made in seawater approach those made with discrete measurements while retaining the high vertical resolution of optical based chemical sensors. Scientists and engineers at Sea-Bird Scientific continue to refine SUNA technology, calibrations and processing to minimize sensor drift and interference from other chemical species for greater accuracy and precision in a wider range of environments.

Thank you for filling out the form!