A Year of Oxygen Measurements from Argo Floats 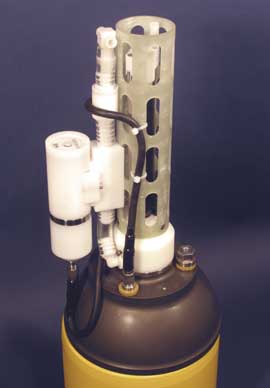 Dissolved oxygen is among the most important biological parameters that can be monitored in the ocean. Surface oxygen values also provide information about CO2 uptake (Emerson 1997).

Oxygen sensors have been deployed on several Argo floats to test how accurately oxygen can be measured over the anticipated 5-year life of a float. Under a NOPP "technique development" grant, the first oxygen-equipped float was deployed at the Hawaiian Ocean Time series (HOT) site, 100 km north of Oahu, in August 2002. The HOT site's extensively documented oceanography (CTD profiles, chemical analysis of water samples, and data from the HALE-ALOHA mooring) tightly define the local environment. During its 14 months of operation, the float has remained within 575 km of the HOT site.

Characteristics of the raw data set and the instrument's calibration stability are summarized here.

The SBE-43F oxygen sensor is an optimized Clark electrode integrated into the exhaust stream of an SBE-41 CTD mounted to an APEX float (NOPP experimental float S/N 894, WMO ID 4900093). Discrete CTD/02 samples are obtained at intervals programmed into the float controller. Between measurements the CTD pump stops but the oxygen electrode remains powered, eliminating the need to re-polarize for subsequent acquisitions. With flow stopped, the sensor's oxygen boundary layer depletes, substantially reducing electrolyte consumption resulting in longer life expectancy and reduced calibration drift. The trial measurement protocol runs the pump for 21 seconds prior to each acquisition to allow the sensor to equilibrate from a near-anoxic sleep state to the local oxygen value.


FEATURES OF THE PROFILE


A YEAR OF OCEAN VARIABILITY NEAR THE HOT SITE

14 months of profiles overplotted on a T-S and T-oxygen plot reveal strong signals in the surface and photic zone, but high calibration stability below 1000 dbars where the watermass T-S is stable. Mixed layer oxygens parallel the theoretical saturation curve. Below the mixed layer, oxygen varies by 16% in the photic zone to a depth of 400 dbars (T = 10 C); variation that crosses watermasses of both stable and variable T-S. This variability in dissolved oxygen is stronger than the 4% episodes reported by Emerson (2002) at the HALE-ALOHA mooring. A year of oxygen variability, measured within 575 km of the HOT site and HALE-ALOHA mooring, is well captured by this Argo float application.


CALIBRATION STABILITY IN THE OCEAN

A seasonal variation of 1.5% saturation is evident in the HOT data and is unambiguously measured by the float. Monthly-mean float values (solid squares) track monthly-mean HOT data (solid line). Float data offset to the HOT mean (open squares) agree with the HOT seasonal trend to better than 0.5% and quantify the SBE-43F calibration drift rate at less than 0.5% per year.

Calibration Drift Before Deployment: The absolute difference of raw float data from monthly-mean HOT data is the drift before deployment and results from electrolyte consumption during the sensor's 9-month exposure to air after calibration and prior to deployment. Calibration drift in the ocean is an order of magnitude smaller because it scales with the total amount of oxygen processed by the sensor. In the ocean the sensor spends most of its time parked with the pump stopped; consequently, oxygen boundary layer depletion minimizes oxygen consumption.


ACQUIRING THE OXYGEN MEASUREMENT FROM A NEAR ANOXIC SLEEP STATE

Pre-Deployment Calibration Drift: The dashed line corrects the float data for calibration sensitivity loss of 2.1% implied by comparison to HOT bottle oxygens (Figure 3). However, at the HALE-ALOHA mooring site intensive gas chemistry measurements indicate that the seasonal mean signal is 2% super-saturated, implying the SBE-43F sensitivity loss was closer to 5% at deployment (solid line, Figure 4). We take 5% drift to be correct.

Adaptive Equilibration Protocol: To correct this oversight an adaptive equilibration time is now calculated at each CTD point, and 5.5 time constants are allowed for each measurement. Under this new protocol equilibration times vary from 11 seconds (shallow and warm) to 47 seconds (2000 dbars, 2 C). Using the adaptive protocol, the SBE-43F sensor will equilibrate to 0.3% of ocean value under all conditions when waking from a near-anoxic sleep state to make discrete measurements.

Under a NOPP "technique development" grant the SBE-43 oxygen sensor technology was deployed on an Argo float to assess a methodology for acquiring oxygen profiles with long-term accuracy.

14 months of P, T, S, & oxygen data reveal rich detail in individual profiles, a wealth of variability in the water column, and high calibration stability in the tight T-S and T-oxygen character at depth. These data reinforce the objectives of Argo.

An annual signal of 1.5% in the surface mixed layer oxygen saturation observed at the Hawaiian Ocean Times series site is well captured by the float. And, the apparent accuracy of the captured signal quantifies calibration stability at 0.5% sensitivity per year or better. Meaningful long-term monitoring of oxygen is feasible at this level of calibration stability.

An under-reporting of oxygen on deep density surfaces is due to insufficient time for sensor equilibration because the measurement protocol neglected to account for the increase in sensor time constant due to pressure effect. An adaptive measurement equilibration time for oxygen is now implemented and this approach is being confirmed on a float in the North Atlantic.

The work reported here was sponsored by Office of Naval Research grant N00014-01-1-1084 to the University of Washington.

HOT data is based upon work supported by the National Science Foundation under Grant No. 9811921.

Steve Emerson and Steve Riser offered valuable critique. The relentless effort of Steve Riser and Dana Swift to test and evaluate float systems and make data instantly accessible on their website has been immeasurably valuable in solving problems and advancing the state of the art.