Reliably Measuring pH in the Ocean 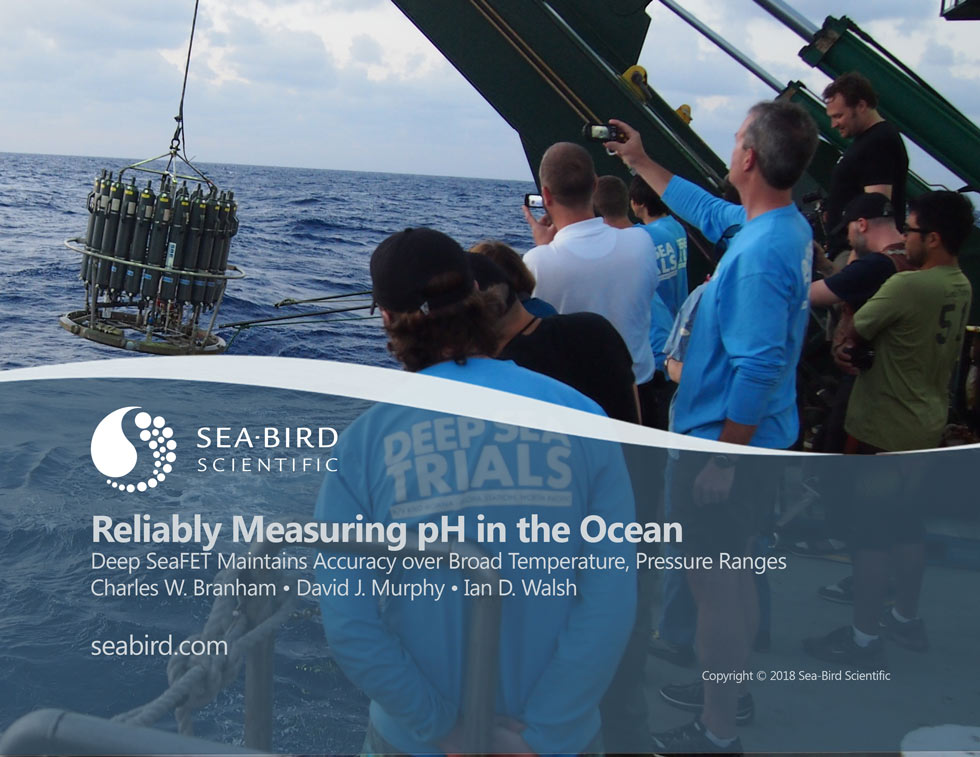 Reliably Measuring pH in the Ocean

Ocean acidification is the ongoing decrease in the pH of the Earth’s oceans, caused by the uptake of atmospheric carbon dioxide (CO2) as water and air mix at the water’s surface. Oceans, rivers, and lakes absorb roughly one third of human-created CO2 emissions (22 million tons) each day. Before the industrial era began, the average pH at the ocean surface was about 8.2 (slightly basic; 7.0 is neutral). Current ocean pH is roughly 8.1. This drop of 0.1 pH units represents a 25% increase in acidity over the past 200 years. Stress on marine life due to acidification (lowering the pH) leads to dying or severely affected ecosystems.

High-resolution in-situ measurements of pH in the ocean are now possible with innovative adaptations of ion-sensitive field-effect transistors (ISFET). Oceanographic instruments based on ISFET technology have been in development for more than a decade, but earlier instruments had depth limitations or significant drift and environmental constraints that limited their adoption. Sea-Bird Scientific’s Deep SeaFET™, an ISFET-based pH sensor, demonstrates that the technology has reached the stability and robustness necessary for a transformation in the quality of in-situ pH measurements. The Deep SeaFET™ extends accurate pH measurements to two applications where depth, drift, and environmental constraints previously limited the availability of quality data:

The Sea-Bird Scientific Deep SeaFET™ is based on the Honeywell Durafet, an ISFET that was originally developed to replace the glass electrode in industrial applications where chemical robustness and dependable long-term measurements are necessary. The chief concern in the development of the deep-ocean-capable Durafet is the maintenance of the accuracy of the sensor over sufficiently broad ocean temperature and pressure ranges: -5 to 35⁰ C and 50 to 3,000 psi (approximately 2000 m depth). The three major sensor components were modified from the original Durafet design to extend the pressure range from 100 to 3,000 psi:

Calibrating the Deep SeaFET™ presents challenges in that the stability of the instrument over the ranges of temperature and pressure expected while deployed on a profiling float has to be demonstrated at the same time. A custom temperature-controlled pressure vessel was designed and built at Sea-Bird.

Figure 1
The Sea-Bird Scientific Deep SeaFET™
Figure 2
Schematic representation of the ISFET, counter electrode, reference electrode, and operating components.
Figure 3
The stability of the Deep SeaFET in filtered seawater over a four-month period in Sea-Bird Scientific’s pH laboratory. The blue line is the pH measured by the Deep SeaFET, and the orange circles are the pH validation samples measured using dye spectrophotometry. The red dash lines indicate when the seawater was exchanged from the system.

Calibrations are performed in this computer-controlled titanium calibration vessel filled with a 0.01 N HCl acid solution of known thermodynamic properties to allow for correction of the sensor response to both temperature and pressure. The calibration procedure runs through a matrix of four temperature and seven pressure points over the range of 5 to 35⁰ C and 0 to 3,000 psi to build the calibration equations for each instrument.

One of the key limitations of standard glass electrode pH sensors is their insufficient measurement stability in all media. The Durafet technology had been proven to be stable in a variety of industrial processes, but little work had been done to demonstrate its stability in seawater. To determine the measurement stability in seawater, a Deep SeaFET™ was placed in a continuous-flow tank filled with filtered seawater over a four-month period. The Deep SeaFET™ was run continuously and delivered pH measurements every 20 seconds throughout the experiment. Validation samples were taken daily and pH was determined in the samples, using standard pH The stability of the Deep SeaFET in filtered seawater over a four-month period in Sea-Bird Scientific’s pH laboratory. The blue line is the pH measured by the Deep SeaFET, and the orange circles are the pH validation samples measured using dye spectrophotometry. The red dash lines indicate when the seawater was exchanged from the system. indicator dye spectrophotometry. The average difference between the Deep SeaFET™ measurements and validation samples were within ±0.005 pH over the entire four-month experiment. The instrument response to rapid changes in pH was demonstrated by exchanging the seawater three times over the course of the experiment. Each exchange exposed the instrument to a new seawater sample with a different salinity, temperature, and dissolved gas concentration. Inadvertently, we also demonstrated the response of the instrument to the effect of biological activity, as the fourth batch of seawater was contaminated. While pH declined much more rapidly over the last week of the experiment, the Deep SeaFET™ measurements tracked the samples as well as it had during the earlier, more stable periods.

Our laboratory work demonstrated that the Deep SeaFET™ is stable in seawater for much longer periods than previous methods. One consideration to achieve this stability in the field is that the solid state Ag/AgCl reference electrode requires conditioning in seawater for at least one week prior to deployment to maintain the accuracy of the sensor in natural seawater. 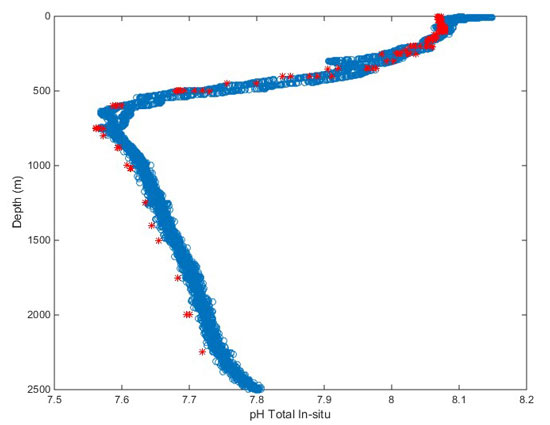 Profile of pH measured by the Deep SeaFET from the final side-by-side XPRIZE competition in 2015 off Hawaii. The red asterisks are the pH measured from bottle samples by NOAA’s PMEL Laboratory.
The Deep SeaFET™ was used in field validation on autonomous profiling floats during the development process. It was also evaluated during the Wendy Schmidt Ocean Health XPRIZE competition in a field trial off the coast of Hawaii in May 2015. In the surface ocean and across the thermocline, the Deep SeaFET™ performed extremely well, to within ±0.005 pH units of the validation measurements. In the deep ocean however, the sensor was less accurate, measuring pH to ±0.02 of the validation measurements. Overall, the Deep SeaFET™ performed extremely well in comparison to other technologies tested and was awarded second prize for accuracy by the XPRIZE award committee in 2015. Efforts to improve the modeling of the pressure response of the sensor in the deep ocean have continued, with updated designs and additional field testing by scientists at both Sea-Bird Scientific and MBARI.

Sea-Bird has integrated the Deep Seafet™ with the following sensors/platforms:

The Float Deep SeaFET™ pH sensor will be available on profiling float platforms from other manufacturers in the future.

For a copy of the complete technical paper, Reliably Measuring pH in the Ocean, published in the February 2017 edition of Sea Technology, contact Payal Parikh (pparikh@seabird.com).

We thank the Wendy Schmidt Ocean Health XPRIZE for providing the ship time to collect the validation data presented here.

Above and Cover:
Participants in the Wendy Schmidt Ocean Health XPRIZE test cruise off Hawaii, watching deployment of instruments on rosette during sea trials May 2015. (Photo Credit: XPRIZE)