Sensors for AUVs and ROVs 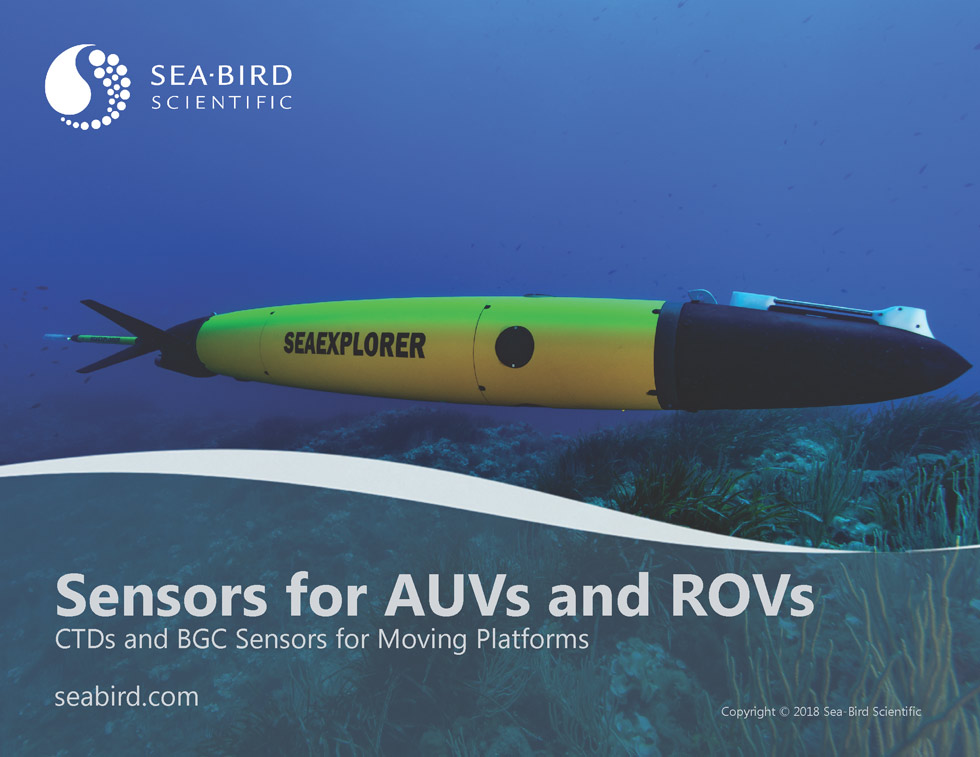 Autonomous and remotely operated underwater vehicles are rapidly evolving to fill scientific niches, many with capabilities otherwise unattainable through traditional manned research at a fraction of the operating cost. Sea-Bird Scientific offers a line of sensors uniquely designed for integration with a diverse array of unmanned underwater vehicles, expanding the data potential of underwater robots and opening new doors for unique research opportunities.

While the original Sea-Bird Scientific products were designed for shipboard profiling, redesign and miniaturization of popular product lines meets the operational requirements of unmanned research platforms while retaining the original data quality. A 1 kg CTD can now replace a 10 kg CTD while maintaining the same accuracy with drastically reduced power consumption. A precision optical sensor can now take up half the space while recording the same data channels. Autonomous Moving platform applications include Unmanned Surface Vehicles (USV), Autonomous Underwater Vehicles (AUV) such as Gliders, and ROVs.

While moored buoy systems are valuable for time series data, unmanned surface vehicles (USV) widen the capabilities of autonomous sampling by skimming across the surface of the ocean, collecting high-quality data along the way. With relatively low-cost deployments, USVs can function like a shipboard thermosalinograph without the associated expenses, filling in data gaps between moorings and travelling to areas otherwise inaccessible by traditional research vessels.

USVs provide a flexible sampling platform—they are often outfitted with a variety of sensors for holistic sampling of surface data along with a real-time data link. Such automated systems allow scientists to deploy USVs for missions that are otherwise too dangerous or cost-prohibitive, and a flotilla of USVs has the potential to provide much greater surface coverage than ever before.

Case Study: Wave Glider in the Gulf of Mexico

Shortly after the wake of Hurricane Harvey in 2017, a USV began chasing after a dark underwater cloud in the Gulf of Mexico. The Gulf Explorer, a Liquid Robotics Wave Glider owned by Texas A&M’s Geochemical and Environmental Research Group (GERG), was deployed on September 8th, 2017 equipped with sensors to measure several variables such as salinity and water temperature and the ability to transmit data back to shore every 30 minutes. Its mission: to better understand and monitor freshwater flowing into the Gulf of Mexico from Hurricane Harvey’s passage. Radiating from river deltas on the coast, this plume of freshwater threatened Flower Garden Banks National Marine Sanctuary, a protected coral reef ecosystem hosting breathtaking biodiversity. At the time of the deployment, it was unclear whether this freshwater plume would reach the sanctuary, and the potential impacts if it did.

Underwater vehicles have been undergoing a form of divergent evolution; the streamlined torpedo is giving way to designs that range from a winged squid to a miniature stealth bomber. Regardless of form, the autonomous underwater vehicle’s mission remains the same: soar through ocean as efficiently as possible and collect data along the way.

Unlike standard profiling applications or shipboard surface sensors, AUVs combine a powerful blend of vertical profiling and horizontal surveys. This creates a unique data handling challenge however, as glider sensors must capture data on both temporal and spatial scales in dynamically changing environments. 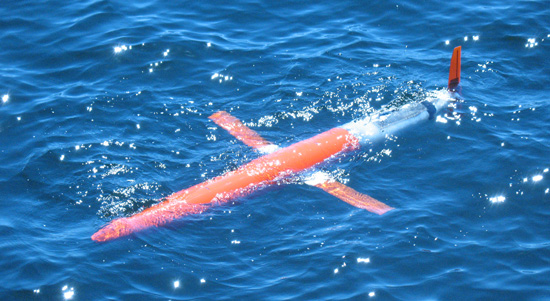 As cruise ships toured the French Riviera, a SeaExplorer glider was hard at work beneath the waves. Completing a continuous 60 day, 1183 km mission on a single battery charge, the SeaExplorer set the record for the longest underwater glider voyage on a single battery charge. Unlike many other gliders that rely on disposable alkaline or lithium batteries, the SeaExplorer powers its flight and payload with Li-Ion rechargeable batteries to reduce operating costs and instrument downtime. Along for the marathon voyage was a Sea-Bird Glider Payload CTD (GPCTD), collecting high-resolution data throughout the voyage despite strict power considerations.

Launched on September 5, 2013 from Cavalairesur- Mer, the SeaExplorer voyaged to Corsica and conducted several alternating trips
On November 5, 2013, LOV scientists recovered it for a total of 1,183 km travelled over 60 days with 18% of its batteries still remaining.

By applying expertise in moored and profiling CTDs, Sea-Bird has designed instruments specifically for the unique sampling requirements of deployments on moving platforms, including AUVs, ROVs, and towed vehicles.

The GPCTD (left), Sea-Bird’s flagship Glider CTD, sports an aerodynamic housing designed for easy integration with gliders. It is also useful on other vehicles—it has been a vital tool for some USV deployments, given its fast sampling capabilities, low power consumption, and native ability to incorporate a pump and oxygen sensor.

Along with CTDs designed for gliders, the SBE 49 FastCAT CTD is a miniaturization of typical profiling CTDs with a sampling speed and reduced form factor ideal for any applications that require rapid response time in a compact package. All of the SBE 49’s sensors and pump are fully integrated in a lightweight and robust package, and a 16 Hz sampling speed provides ideal data quality for deployments on a moving platform.

In a 2011 Case Study, Sea-Bird Scientific explored the requirements behind obtaining quality CTD data from a glider CTD. We found certain traits to be important, and incorporated them into the GPCTD and Slocum Glider CTD. 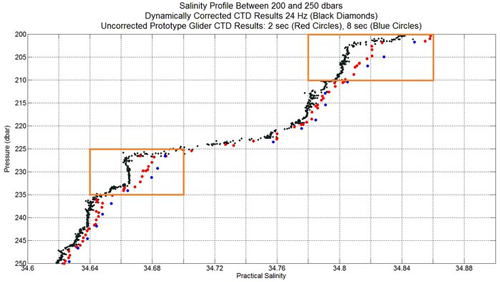 Monitoring of the ocean response to climatic and anthropogenic forcing is critical to understanding impacts on the global carbon cycle and ecosystem responses. Fundamental changes in the oceans’s biogeochemical cycles, driven largely in response to increased atmospheric CO₂ concentrations, are already underway.

Many AUVs and ROVs provide flexible sampling platforms, and are often equipped with a robust power supply, data loggers, and telemetry for realtime data transmission. Combined with the flexibility of deployment scenarios, it’s natural to incorporate a wide variety of sensors beyond the standard CTD.

To accommodate the needs of AUV/ROV research, Sea-Bird manufactures redesigned versions of biogeochemical sensors specifically made for lowimpact integration with autonomous and remote moving platforms.

Nitrate is often the macro-nutrient that limits primary productivity in the open ocean, and is often responsible for massive phytoplankton blooms when it flows out of rivers and streams into the coastal ocean. AUVs and ROVs outfitted with the Deep SUNA UV Nitrate sensor can be deployed to help understand nitrate dynamics in both the coastal and open oceans.

The SUNA V2 and Deep SUNA do the same thing—measure nitrate in water—with the same proven MBARI-ISUS nitrate measurement technology. Both have robust metal housings, and produce data that can be improved with the same temperature and salinity correction algorithm. So why does the SUNA V2 often reside in steams while the Deep SUNA explores the blue-ocean depths?

Click on the following to read more on each subject:

The Economist: 20,000 Colleagues Under the Sea

Sensors for AUVs and ROVs